Concussion injuries taking a toll on young athletes, despite advances at elite level

Concussion injuries taking a toll on young athletes, despite advances at elite level

It was an innocuous head clash that would completely wipe Zabreena Manjerovic's memory of the 2018 Tasmanian State League women's grand final, and the premiership celebrations that followed. Attacking a loose ball in the middle of Launceston's York Park, Ms Manjerovic clipped heads with an opponent.

"I whiplashed, stood up and everything was spinning, blurred vision," Ms Manjerovic said.

"I came to the boundary, did a concussion test and I passed, and they were like 'yep, you're sweet, go back on'."

Although Ms Manjerovic didn't know it, it would be the last time she would ever step onto a football field.

It turned out to be the final blow after enduring seven concussions in eight years.

"The next day I had a massive headache and they asked me if I was just hungover. I said no, I know the difference between a hangover headache and a concussion headache," Ms Manjerovic said.

"The Tuesday was really bad, so we called an ambulance, went to hospital. Couldn't remember my name, my date of birth, didn't know where I was. So then it was proper concussion onset, a delayed reaction."

Forced to live a quiet life

At just 22, Ms Manjerovic has been diagnosed with post-concussion syndrome and was told by doctors she is at risk of early onset Alzheimer's by the age of 35.

She's already donated her brain to the Australian Sports Brain Bank and believes there's a chance she'll be diagnosed with Chronic Traumatic Encephalopathy (CTE) after her death, a brain condition caused by repeated blows to the head and only so far confirmed in a handful of recently deceased elite athletes.

Life for Ms Manjerovic is quiet.

She lives on her own in a recently purchased home at Molesworth, a small town nestled in hills a 40-minute drive from Hobart.

The tranquillity suits her, as her condition means she's unable to deal with loud noises or bright lights.

Doctors have warned her against exercise and have only permitted her to work a maximum of 20 hours per week, or else she risks intense bouts of fatigue and dizziness.

"It's usually get up, work four or five hours a day, go home and sleep. I can't go out, I'm stuck at home," Ms Manjerovic said.

"If I just want a casual catchup, I can't. I'm just not well enough."

Ms Manjerovic isn't pointing the finger at anybody in particular, but does believe her zest for playing football, and a "she'll be right" culture that allowed her to repeatedly put her head in the firing line, contributed to her condition.

She believes local and amateur sportspeople are largely in the dark about the dangers of concussion.

"Nobody knows much about it and people are ignorant like I was. they think it's never going to happen to me," Ms Manjerovic said.

"The adults and the clubs need to step in and say it's better in the long run (to sit out) because we don't want you ending up like this, because I wouldn't wish this on my worst enemy."

When 14-year-old Holly Radburn was knocked out for a third time in 2018 while playing representative football, she says an official from another club indicated she'd be ok to return to play in a matter of weeks, but her symptoms have lingered for 18 months, rendering her unable to play any contact sport.

Last year, she suffered her fourth concussion and was unconscious for "about a minute" before her mother was told by an official to hastily remove her from the playing field in a breach of protocol.

"My mum, who didn't know about concussions at all, had to walk me off the field, and they didn't even check my neck or anything," Ms Radburn said.

"They started asking me questions and I couldn't speak, and panic just set in.

"I still couldn't speak, and I think if someone can't speak, they shouldn't be taken from the field."

Holly missed two months of school and can now only attend three classes a week due to intense fatigue.

"Because I was so young, I felt like everyone knew so much more than me and I had to act OK."

Concussion and its effects are grabbing more headlines at the elite level of football, but at the local and community level, management and identification of concussion is often done in a haphazard manner.

Physiotherapist Matt Jensen, who has been treating Holly Radburn for several months, believes that while concussion and head knocks are inevitable in contact sport, those guidelines aren't always adhered to.

He said some amateur and junior clubs were lost when it comes to appropriately managing potentially serious head injuries.

"[They] dance between sports trainers which have a little bit of knowledge and make too broad a call, to people who are a little bit of the 'oh you'll be right, you'll come good'," Mr Jensen said.

"If it was my on-field management, I would have left her [Holly] exactly where she was and called an ambulance."

It's a view shared by neuroscientist and research manager of the Australian Sports Brain Bank, Associate Professor Alan Pearce.

He is happy with the progress the elite level of sport is making when it comes to identifying and managing concussion, but doubts the same care and concern is being implemented at the community level.

"There really hasn't been that follow-through down to club levels where I think there could be much improvement in the management of concussion and recognition that it is a serious injury," he said.

"At this stage, we need to see more evidence that acceptance of the injury is actually coming through."

When 21-year-old Liam Kendell was knocked out in an off-the-ball incident while playing senior amateur football earlier this year, he lost about 30 minutes of his memory and was ruled out for the remaining four weeks of the season.

"I guess I was just more confused. It's a weird situation to be in, it's not like anything I've experienced in the past. I'd definitely say it's not a positive feeling, " Mr Kendell said.

The offending player was offered a four-week ban by the league, but had it thrown out on appeal after successfully arguing the report was not lodged in time to the tribunal.

For Mr Kendell, the lack of justice for what he believed to be a clear-cut illegal incident which was caught on video left him bewildered.

"I think if anyone looks at vision like that of themselves getting knocked out when they're not braced or ready for the contact, they're not going to be happy about it. I was angry about it," Mr Kendell said.

Steps in the right direction

Attitudes are improving in some quarters of the local game though.

The North Hobart football club is making in-roads in its management of concussion with baseline testing of its players at the beginning of each season and a firm implementation of the "when in doubt, sit it out" mantra.

"We run concussion workshops with our physiotherapists and have a concussion policy online," said head trainer Ashleigh Pearton.

"It depends on the club you're at and the level of support you have behind you and the education you have too.

"We are just super cautious because we don't know what's going to happen down the track with concussion, so everyone is on board with the management."

The Brain Injury Association of Tasmania wants increased education on the dangers and long-term effects of concussion delivered through the state's schools.

"If you have a look at say family violence, or coward punch or even bike helmets, we tend to put that in at the younger age and it carries through," executive officer Deborah Byrne said.

"But I don't think we're putting enough emphasis on concussion and the risk of concussion at the local level, and for younger players." 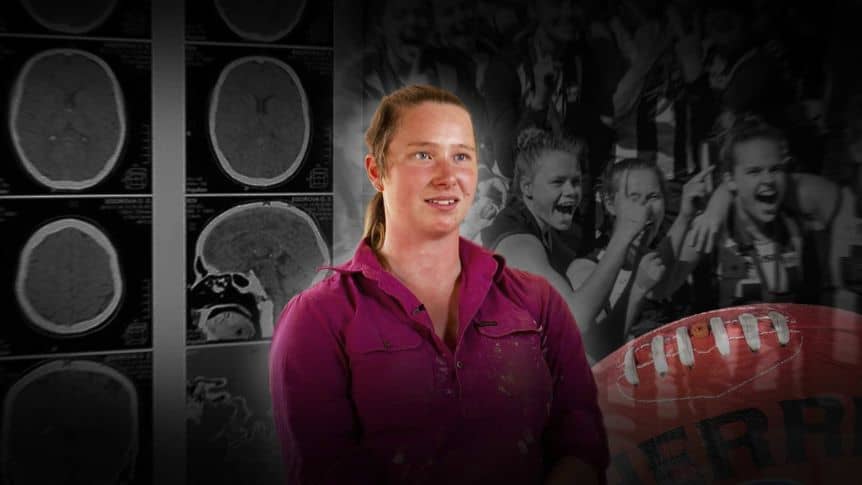