Decades of disability work at risk

Cessation of funding on June 30 will effectively eliminate all information, advice, referral, community outreach, education, training, systemic advocacy and community awareness services in the community for people living with or impacted by brain injury.

THERE are 18 disability organisations in Tasmania whose funding will cease on June 30. These organisations provide a wide range of services in the community to thousands of Tasmanians, many of whom are not eligible for the National Disability Insurance Scheme.

Four of these 18 have been providing specialist brain injury support in Tasmania for more than 20 years; they are the only organisations with this expertise.

Cessation of funding on June 30 will effectively eliminate all information, advice, referral, community outreach, education, training, systemic advocacy and community awareness services in the community for people living with or impacted by brain injury.

The State Government believes these organisations and the other 14 affected, will be able to continue operating through the national Information, Linkages and Capacity Building grants.

As stated by Disability Services Services Minister Jacquie Petrusma on being questioned by Greens leader Cassy O’Connor in State Parliament on April 10, “Some information and communication type advocacy services will be auspiced under the Information, Linkages and Capacity Building program which is administered by the National Disability Insurance Agency for which commissioning has now commenced.”

What the minister fails to understand is, for the following reasons (and probably a whole lot more), the National Disability Insurance Scheme’s Information Linkages and Capacity Building program is inherently flawed and will not be the lifeline these organisations need:

WITH the revised Information Linkages and Capacity Building strategy, grant rounds are now national and competitive — the minister’s statement presumes organisations will be successful; what happens if they are not?

UNDER the previous strategy, organisations in NSW, ACT, and SA had the opportunity to apply for jurisdictional grants. The outcomes of these projects provide evidence to support further projects, providing organisations in these states with a competitive advantage. By contrast, in Tasmania, underfunding by successive state governments has resulted in organisations not having the resources to capture data, and therefore being unable to provide evidence needed to show the effectiveness of their services.

THE Information Linkages program now has four grant rounds, rolled out over the next six months. Grants can take anywhere from 30 to 60-plus hours to complete. Given that “Grant money cannot be used for costs incurred in the preparation of a grant application or related documentation”, organisations will struggle to resource the grant application process. As a result, resources will be diverted from their core business of supporting people with disability at a time when demand is increasing.

GRANT MONEY can only be used “to pay for the portion of operating and administration expenses directly related to the project as per the grant agreement”. Without the infrastructure funding to exist, organisations will not be in a position to apply.

MOST organisations losing their funding are small in size but big on reach. They run on the smell of an oily rag and punch far above their weight. Although not fit for purpose, the Information Linkages and Capacity Building program is currently their only lifeline and, as such, is critical to their survival. They will be competing, however, against larger organisations, nationally and in Tasmania, who view funding as an opportunity for add-on services or to become even bigger; large organisations that have the time and resources to dedicate to funding applications.

INFORMATION, Linkages and Capacity Building program is project based. Projects are primarily single focus and time limited; whether one year or three years is purely semantics. The majority of organisations losing their funding at the end of June are not single function; they are the community’s safety net, responding to need and providing a wide range of services. What they need is surety of ongoing funding, not a drip-feed of project funding.

BY THE TIME the cracks in the current Information, Linkages and Capacity Building program appear, the services and supports needed to address the problems will have gone, along with years of knowledge, expertise, and partnerships; more will certainly be lost than gained along the way.

What the Tasmanian Government has failed to realise is, while organisations will disappear, the problem will not.

A person with brain injury who doesn’t receive support in the community will appear with multiple issues somewhere else in the system, most likely the revolving door of prison, and/or homelessness services, mental health services, alcohol and drug services, family violence services … the list goes on. The cost may have shifted from disability support, however will be significantly higher at the next stage, and the next, and the next.

While the State Government can argue it has handed over all its disability funding to the NDIS, not everyone using the services provided by these organisations is, or will be, eligible for the NDIS and, more importantly, in most instances the right response is mainstream or community care, not disability. The Government can also argue it has secured $570,000 bridging funding for these organisations. Split between 18 organisations $570,000 will not go far and bridging to what — one flawed system to another?

The Brain Injury Association of Tasmania firmly believes the State Government has drastically underestimated the significant impact the loss of these organisations will have on the Tasmanian community and Tasmanian economy, and needs to move immediately to address this. It has an obligation under the bilateral agreement it signed with the Commonwealth to ensure support for people with disability continues, and people with disability are not disadvantaged by the implementation of the NDIS.

It is also incumbent on the Tasmanian Government under the bilateral agreement to manage risk, something they are currently failing to do.

The resources needed to address the problem are not huge. What is huge is the number of people who will be affected if the problem is ignored.

Article published in Talking Point section of The Mercury Newspaper 8 May 2019 by Deborah Byrne, executive officer of the Brain Injury Association of Tasmania. 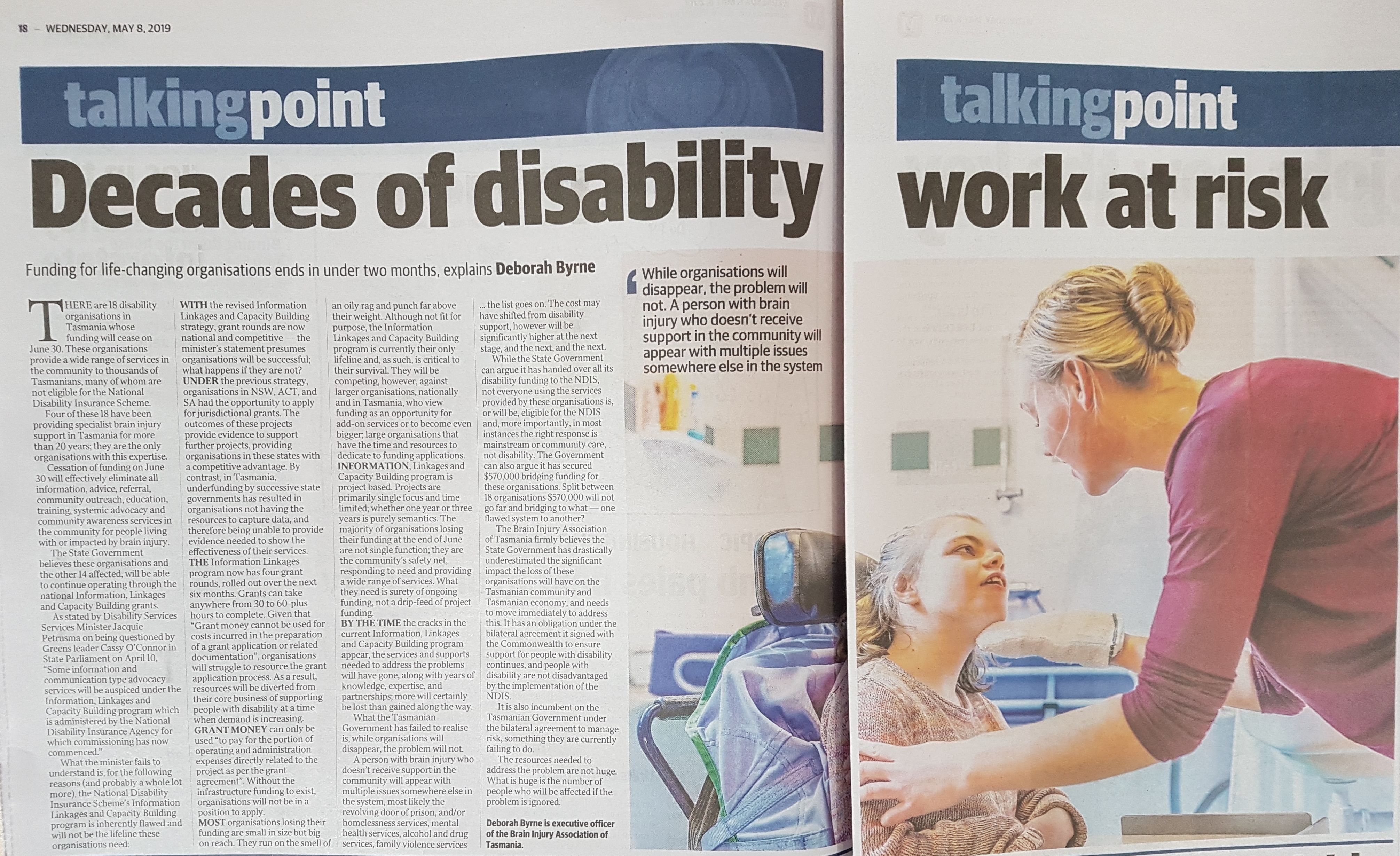