In the news: Brain injury in sport

The AFL has announced a series of rule changes for 2021 but coaching legend Kevin Sheedy says there is one rule he fears won’t change unless there is a fatality on the field.

Coaching great Kevin Sheedyfears an AFL player could be killed going back with the flight of the ball if the league doesn’t legislate to make the game safer.

The legendary coach and now Essendon board member told the Sunday Herald Sun his two biggest on-field player welfare concerns involved the sling tackle — which the AFL has moved to address in recent seasons — and players being crunched when going back directly the flight of the ball.

Sheedy was sickened by what happened to Port Adelaide veteran Brad Ebert after he was accidentally concussed when courageously going back with the flight in the dying moments of this year’s preliminary final against Richmond.

It proved to be Ebert’s last act as a player with his retirement coming immediately after the game.

While he knows any move to legislate against players going back with the flight would be a significant departure from footy tradition, Sheedy said the “crazy brave” moves celebrated by coaches and fans aren’t worth the game ending up with a fatality on its hands.

“We don’t need a death in our game,” Sheedy explained. “We are not ready for that and we don’t want it, so we have to protect the players from themselves.

“If we lost someone it would send a cyclonic tsunami through the ranks and the flow-on impact at all levels of the game would be enormous.

“I don’t know how we can change this, but the onus is on the AFL to at least look at it before someone dies.”

Sheedy said the AFL must have the hard conversation about doing more to protect players’ heads.

“This has to be a really big worry for (AFL legal counsel) Andrew Dillon and the legal department of the AFL,” Sheedy said.

“We don’t need the death of a player running back with the flight of the ball and being smashed before we start looking at how we can prevent this from happening,” he said.

“We admire the courage of those players, but sooner or later, someone is going to die.

“The two biggest worries I have are the sling tackle and players concussed when going back with the flight. We have started to try and fix the sling tackle issue, even though they made a mistake with Shaun Burgoyne’s one.

“But now we have do something to protect the player going back with the flight of the ball and getting smashed.”

Call to ban the header

England’s record goalscorer Wayne Rooney says children should be banned from heading the ball, following the example of the United States, to reduce the chances of getting dementia later in life.

A study carried out in Scotland concluded professional footballers are around three and a half times more likely to die of dementia than the general population.

Rooney told the Daily Telegraph he witnessed the US rules first hand with his son Kai when he played for MLS franchise D.C. United.

“When we lived in the States, my eldest boy was in a football team and heading was banned in training and in games,” said Rooney, who now plays for Championship side Derby.

“If the ball was coming to their head, they moved away from it and let it run through, so maybe that’s something that could happen on a more regular basis over here. Clearly, something needs to change to make sure this doesn’t happen to the next generation of players when young men are dying of this disease.”

Lawyers have confirmed an action has begun on behalf of former players suffering with the neurodegenerative disease, who plan to seek compensation from organisations understood to include the Football Association.

However, FA chief executive Mark Bullingham said despite the findings of the Scottish study - which the FA and the Professional Footballers' Association (PFA) co-funded - it is "not entirely clear cut" what causes the increased risk.

"My mother suffers from it (dementia). I see it first hand. It's horrible," he said. "I don't think it's entirely clear-cut to identify the risk factors.

"But obviously heading could be one of those risk factors."

Article published in the Mercury Newspaper on Sunday 22 November 2020

Link to the ABC News Article 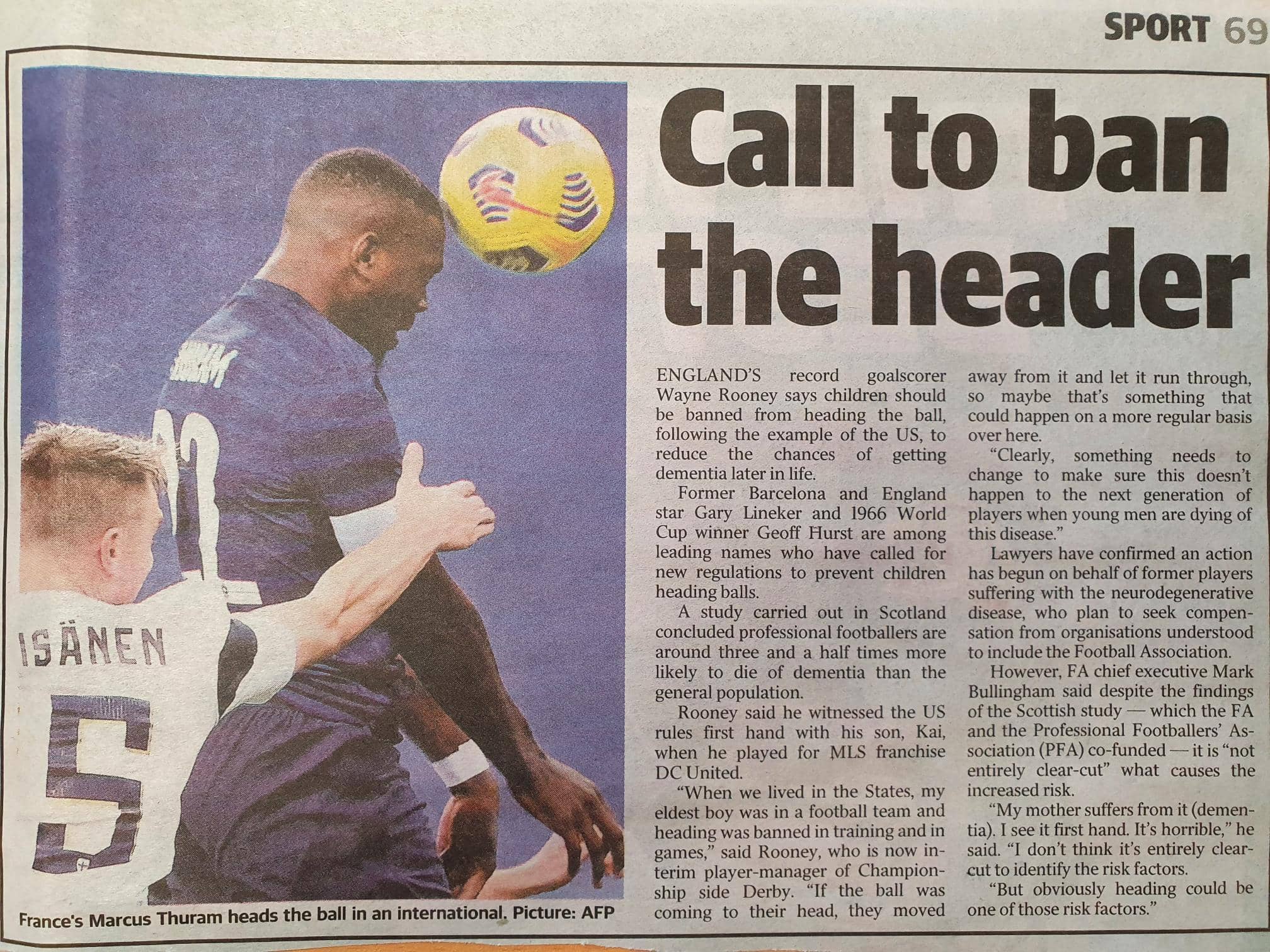