In the news: Tassie must stand up for thousands with brain injury

BRAIN injury is common. According to the Australian Bureau of Statistics, more than 700,000 Australians have a brain injury with limits on their daily activity and participation. Three in four are aged 65 and under. Up to two of every three acquired their brain injury before age 25. And the rate in Tasmania at 2.2 per cent is higher than the national average (1.8 per cent).

I wonder, after reports that the federal government was considering cutting National Disability Insurance Scheme support to people with acquired brain injuries, the federal government is fully cognisant of the national definition of acquired brain injury. Causes include: STROKE — there are 56,000 new strokes each year in Australia and Tasmania has the highest incidence for its size. More than 8000 Tasmania stroke survivors are living with ongoing disability. TRAUMATIC BRAIN INJURY — falls, assaults, sporting accidents, bicycle accidents, etc. TBI is a major cause of lifelong disability. The significant portion is motor vehicle related however people generally receive lifetime care or compensation under state government motor accident insurance schemes). DEGENERATIVE neurological conditions including Parkinson’s Disease (the number of people with Parkinson’s is growing at three times the rate of population growth); multiple sclerosis (the prevalence in Australia in 2017 was 103.7 people per 100,000 compared to 95.5 in 2010); Huntington’s Disease (Tasmania has an unusually high prevalence), motor neurone disease; muscular dystrophy etc. BRAIN TUMOURS, infection, poisoning, hypoxia/ anoxia (lack of oxygen).The federal government move would exclude a significant number of people, diagnosed with a wide range of disabling conditions, from the NDIS.

While a person’s diagnosis is important, the NDIS also states that “functional capacity is one of the key factors in determining eligibility for the NDIS.” The impact of brain injury on a person’s cognitive and functional capacity can be disabling, with impairments often lifelong. Although a cost-cutting measure of denying support has not come into effect, to even consider it is abhorrent.

Tasmania has agreed to pay a fixed annual contribution to the NDIS, set at $233m in 2019-2020 then escalating at 4 per cent a year. This contribution, which represents the total Tasmanian disability budget, is for the support of Tasmanians with disability, including brain injury.

If funding is not found, the Tasmanian taxpayer will still pay, however the cost will be significantly higher.

Research shows the care burden on families is much higher after brain injury.The NDIS can do much to alleviate this care burden. If people with brain injury are excluded from the NDIS not only will they present more often in our overburdened health system, their families will too.

We know people with brain injury are over-represented in our (already overburdened) justice system. Remove any chance of funded support to keep them out of the system and offending and recidivism rates will continue to grow.

Deny people with brain injury access to the NDIS and they will turn to our overworked and underresourced community sector.

Deborah Byrne is executive officer of the Brain Injury Association of Tasmania.

Talking Point article published in the Mercury Newspaper, Friday 7 May 2021. 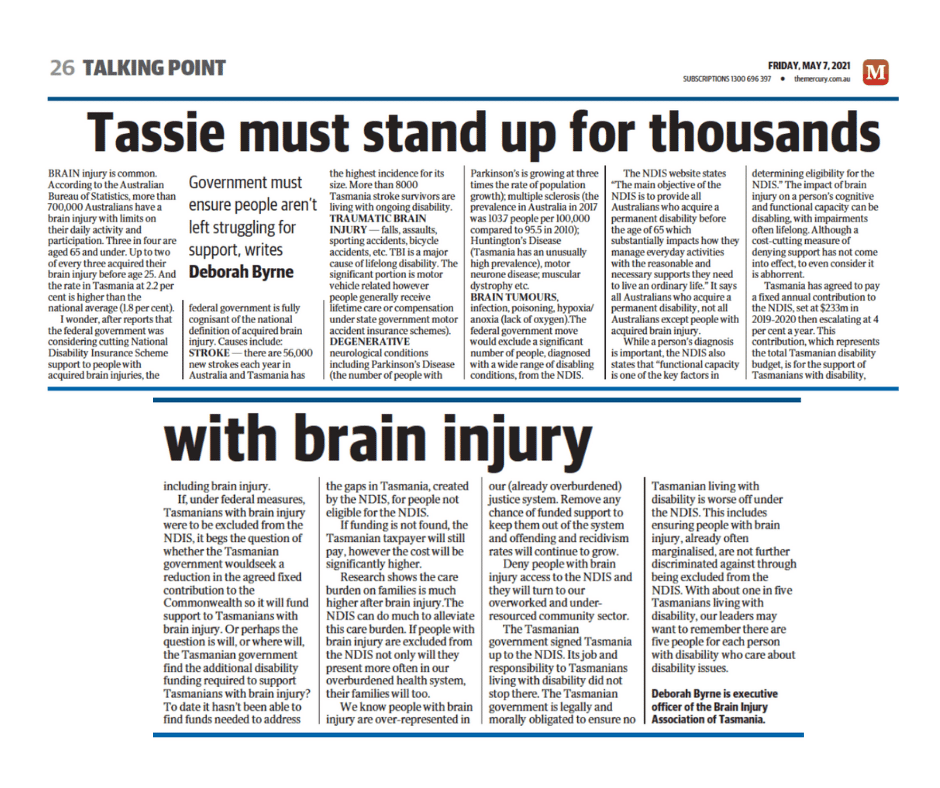