'All things aren't equal for Tasmanian's with brain injury.' Deborah Byrne, BIAT executive officer, continues to raise awareness of brain injury with this 'talking point' article published in The Mercury Newspaper on Friday 26th of January 2018.

It is estimated that 2500 Tasmanians sustain a brain injury, across all severities each year.

Whilst it can be argued that life today is better for some Tasmanians with brain injury and their families, there continues to be groups that remain at risk of unnecessarily restrictive lifestyles, poor access to services and opportunities and other serious inequities.

The Brain Injury Association of Tasmania (BIAT) believe this is largely due to misconceptions about this disability amongst the wide range of services people with brain injury access and, more importantly, services not understanding why they need to be aware of, or have knowledge about, brain injury.

It remains a source of frustration to BIAT that brain injury has barely made a dent on the public imagination, let alone on those policies and practices that discriminate against and exclude people living with brain injury, frequently putting them at risk of neglect and abuse.

The impact of brain injury is often ongoing and can impact an individual's physical, cognitive and psychosocial functioning.

However, increased awareness of brain injury, and the support services available, has the potential to prevent the downward spiral of negative life events.The implications of the risks for individuals and families affected by brain injury are devastating, and represent significant financial and social cost to the Tasmanian community.

The report estimates the cost of traumatic brain injury in Australia to be $8.6 billion. With the rate of brain injury in Tasmania estimated at 2.2 per cent, the proportional costs for Tasmania is $189.2 million.

It should be noted this figure excludes mild traumatic brain injury, and that mild to moderate brain injury is on the rise in Australia. Furthermore, the term 'mild' refers to the severity of the initial trauma that caused the injury. It does not indicate the severity of the ongoing consequences which can still be complex and ongoing.

Research findings position brain injury as a contributing factor to, and consequence of, family violence, and suggest urgent attention is needed to ensure the effects of living with a brain injury are accommodated in current family violence intervention and prevention strategies.

People with disability, particularly brain injury, are more at risk of being jailed and, without adequate support or with interrupted care, of reoffending. Despite nearly all forms of disability being more common among prisoners than the general population, the National Disability Insurance Scheme specifically excludes prisoners.

To compound the issue, the introduction of the NDIS has seen a reduction in the number of specialist brain injury service providers in Tasmania, with only one now remaining.

BIAT's future under the NDIS is also uncertain. Its closure, after 20 years of service, would result in a significant loss of social capital to the Tasmanian community.

If people living with brain injury, and their families and carers, are going to be truly supported and included in Tasmanian society they need a whole of government approach - to ensure timely and equitable access to the specialist and mainstream services they need, and not-for-profit brain injury services continue to be an integral part of Tasmania's community sector.

By Deborah Byrne - executive officer of the Brain Injury Association of Tasmania.

Article published in the 'talking point' section of the Mercury Newspaper on Friday 26th of January 2018. 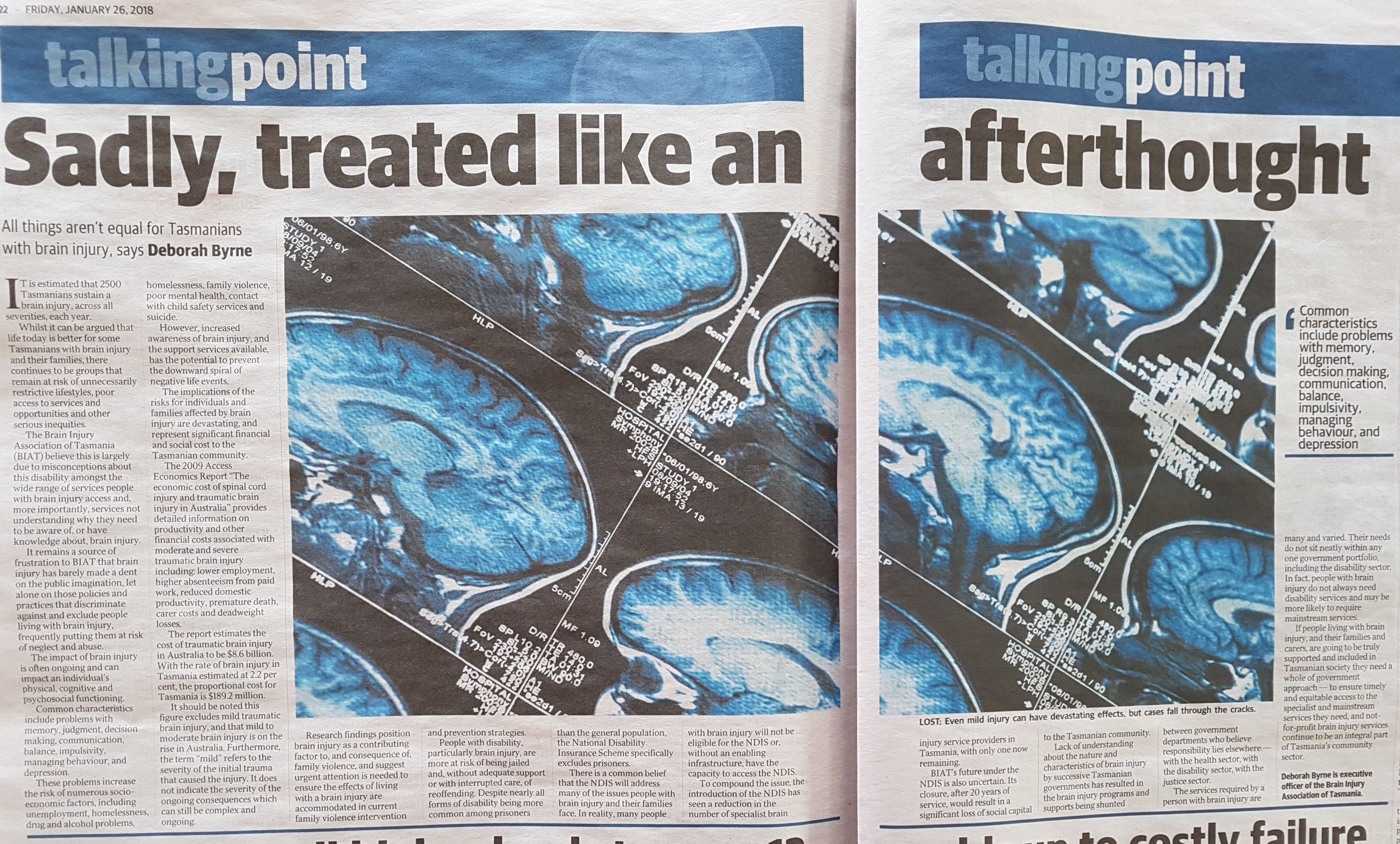