Find out more about the role disability support workers play in the lives of people with acquired brain injury in this wonderful article published in the Examiner Newspaper in the lead up to Brain Injury Awareness Week 2019.

Launceston's Ross Cundall is no stranger to supporting people living with disability but in the last few years, as a disability support worker with Li-Ve Tasmania, he's discovered the particular rewards of supporting participants with an acquired brain injury [ABI].

"The thing about acquired brain injuries is that they can vary a lot from person to person," said Ross.

"Right now, I'm supporting two participants with an ABI and they are quite different.

"One fellow, Jerry* suffered his injury through trauma. That incident has turned his life upside down. He was a business owner, and now he struggles with memory issues - he sometime struggles to remember to pay his bills," he said.

"My other participant, Tom*, looks like your average bloke but when you start talking to him, he's slow to respond. It becomes obvious that he has a brain injury. So, Tom is shy about starting a conversation, especially with someone new."

Ross explains that Tom doesn't always understand what people are saying to him and he's sometimes reluctant to speak because he worries about the stigma of having an ABI.

"That's where I can support Tom," Ross said.

"For instance, this morning Tom told me his car was due for a service. We talked about where we might take it and we went together to the local mechanic. When we arrived, Tom wasn't sure what to say, so I introduced us both and explained why we were there.

"The mechanic quickly twigged what the situation was. He asked Tom when he wanted to book the car in and gave Tom plenty of time to process the question and come up with his answer.

"That's all people need to do,' Ross said, "be patient and respectful."

"Chances are, after a few more visits, Tom will feel confident to go to the mechanic by himself. I used to take him to a nearby cafe but now the wait staff know him, plus he understands the layout and the ordering process, so he now goes by himself. He'll even take his mum out on a coffee date there.

"Often that's where support work has the biggest impact - and the most fulfilling rewards for me. You've developed the rapport with the person, you've helped them build skills - and it's so rewarding when they are confident enough to take the next step and tackle something on their own.

"Just talking about it gives me goose pimples.

"I'll be honest, often, I don't see myself as a support worker - mostly I feel like one of their mates," Ross said.

Published as part of an Advertising Feature for Brain Injury Awareness Week on Monday 12th August 2019 in the Examiner Newspaper. 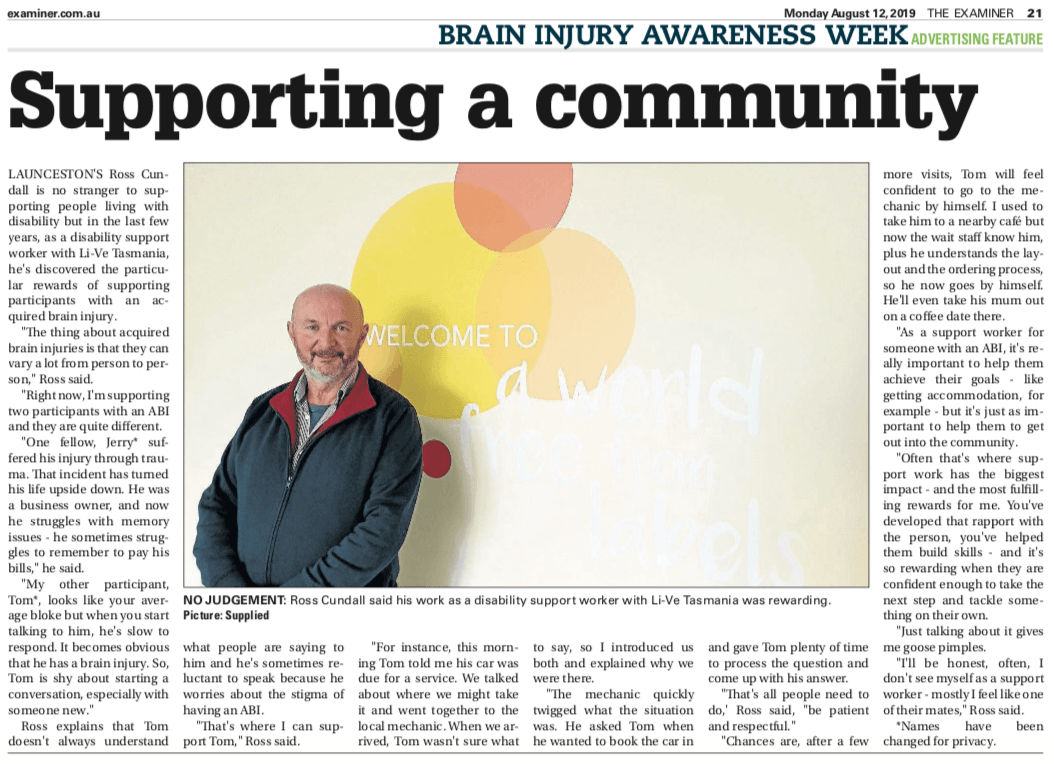