Learn more about brain injury, including brain tumours, and the BIAT launch of Brain Injury Awareness Week in Tasmania - in this Examiner Newspaper feature.

It is a significant week not only for people who live with or are affected by brain injury, but also for organisations, like the Brain Injury Association of Tasmania (BIAT), that support them.

This year’s event (at the ABC Building in Liverpool Street) will also include the Tasmanian launch of BrainLink’s: Practical Guide for Families and People with an ABI [acquired brain injury] resources, and the launch of two, Tasmanian, brain injury specific NDIS Information, Linkages and Capacity Building (ILC) projects.

In addition to increasing general community understanding of brain injury, Brain Injury Awareness Week in 2019 will also focus on brain tumours. Tumours cause damage to the surrounding brain tissue and structures as they grow within the brain.

Every year an estimated 2000 malignant (cancerous) brain tumours are diagnosed in Australia. Benign or non-cancerous brain tumours, which are more common than malignant tumours, can prevent an area of the brain from functioning properly.

Brain injury has many different causes including trauma, stroke, infection, tumours, drugs or alcohol.  It can happen to anyone, anywhere, at any time during a person’s life!

Very few of us, however, wake up each morning and consciously think about the impact a brain injury could have on our life, or what we will do that day to avoid a brain injury.

The Brain Injury Association of Tasmania works to raise community awareness of brain injury and its impacts, and to reduce the incidence of brain injury.

BIAT also drives change to improve the lives of, and provides a voice for, people living with or affected by brain injury.

Acquired brain injury (ABI) is not ageing, a disease, a mental illness, or an intellectual disability.  It is a complex spectrum disorder that refers to any type of brain damage or neurological disruption occurring after birth.

It is a common disability in the community affecting over 1.6 million Australians, or 1 in 12.

Although this figure is large, it underestimates the true impact of brain injury, as many individuals with milder injuries are often unknown to the system.

This is partly because physical impairments, which are easily detectable, are frequently mild or absent after ABI, while the more common disabling problems of cognitive and behaviour impairments are often not detected or are misdiagnosed by medical professionals.

For more information on brain injury contact BIAT on 1300 242 827 or enquiries@biat.org.au

Article published in the Examiner Newspaper and the Advocate Newspaper on Monday 12th of August 2019. 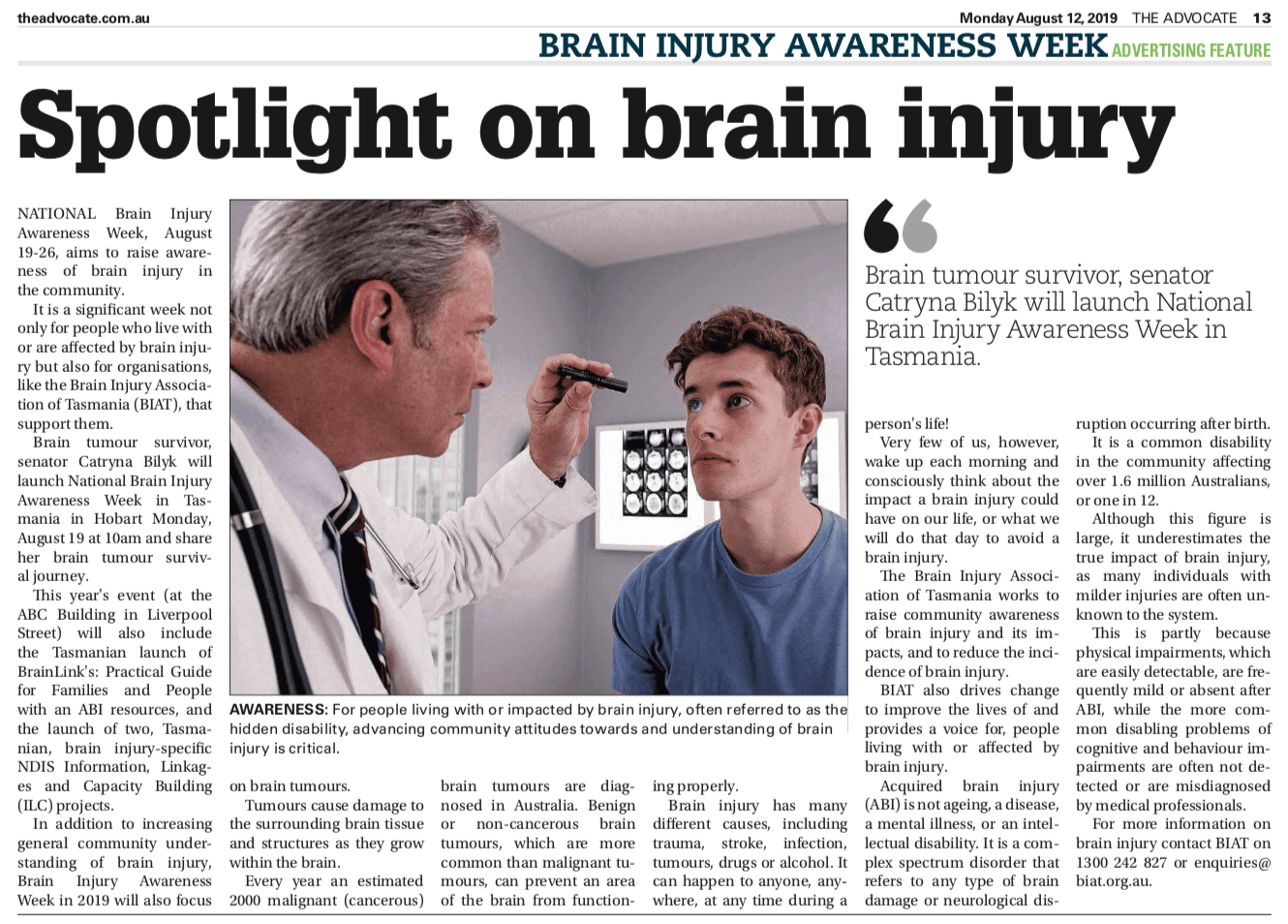